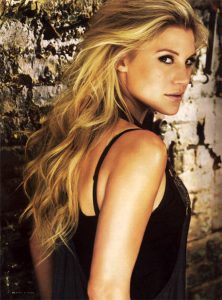 In an interview with Al Norton from 411mania, Katee Sackhoff discussed her role in the upcoming Riddick movie. Sackhoff revealed just how nervous the project made her and talked about her first ever experience of on-screen nudity in the film and how her family reacted to the news.

Al Norton: Are you excited for audiences to get to see Riddick?

There are other women in the movie but for the majority of the movie it’s my character so if someone says, “oh, the girl was bad” they’re not going to have to say which one; they’ll be talking about me. I’ve got nowhere to hide in this movie and I haven’t seen it so I’m a bit terrified. This is the direction I wanted my career to go, I wanted to go into features and do more action, stunt-y type movies and also doing movies that are different and talk-y, too. I really want this to work and I have a lot riding on it.

Al Norton: I don’t want to seem gauche for bringing this up but I understand Riddick has your first on-screen nudity.

Katee Sackhoff: Yeah, it is.

Al Norton: Which was the tougher conversation to have, with your fiancé or with your parents?

Katee Sackhoff: (Laughing) Although I love my fiancé with all my heart, if he told me not to do something I’d still do it. Of course there’s a part of me that will always respect his opinion on things but when it comes to my career and when it comes to a decision I feel passionately about, I don’t think there’s anyone in the world that could actually talk me down. I’m incredibly opinionated and strong willed, especially once I’ve made up my mind.

That being said, I hadn’t made up my mind about this yet. My Mom was actually in the car with me when I found out I got the part. I hung up on David Twohy (the writer and director of Riddick) after telling him, “I need to call my Dad and ask if I can do it first.” I was 31 years old, it’s not like I was a child (laughing). I called my Dad and told him and he said, “how much?” I said, “3-5 seconds of side boob” and then he goes, “which boob?” and I said, “I don’t know, hopefully the good one.” He said, “it’s not something I ever wanted to see my daughter do but at the same time, Katee, you’ve held out for so long.”

I’ve turned down so many projects in my life, so many projects, all because of my Dad, and he said that it spoke in great lengths about my passion for this movie that I was finally willing to do it. I finally got to the point in my career where I don’t think anyone could say, “she’s the girl who took her clothes off to get famous.” I was waiting for that moment, where in my mind it would be acceptable.

My Dad said, “go for it”, my brother said, “how dare you ruin the movie for me!” and my fiancé sent me flowers that said, “you’ve waited long enough, I’m proud of you.” I feel like I had waited long enough; I’ve been doing this since I was 15 years old and I’ve been waiting for this movie or a movie like this to come along, so I was excited.

Al Norton: I keep in my head a running list of potential band names and now “3-5 Seconds of Side Boob” is totally on that list.

David Twohy was amazing. I told him, “DT, I love you to death, and I love my boobs, but I’m not 24 anymore. They’re not perky boobies like they were; these are the boobs of a woman in her 30’s.” He told me, “Katee, your tits are going to look great.”

Al Norton: If only the movie had come out a year earlier, you might have made it into MacFarlane’s Oscar monologue song.

Katee Sackhoff: (Laughing) I’m not sure I’m even on his radar screen.

Sackhoff plays Dahl in the new Riddick movie, which is due to hit cinemas on the 6th September 2013. Don’t forget to subscribe to this website to be kept up to date with the latest news.